A place for the members of the Cranboyz to share stories about Comic Books, Conventions and Artwork!

Popa's Favorite Comics of 2018 (In No Particular Order)

I decided to get back into the regular comics buying habit this year.  I'm not sure what inspired it exactly, other than missing the fix.  Plus there's so much good stuff coming out that I was tired of feeling behind the curve on everything.

What follows is my favorite comics from 2018.  It's not in any order, it's just the books that stuck out to me and that I look forward to the most.

I even tried getting back into Marvel Comics with a couple of their relaunches from earlier in the year but, well, those books just aren't my cup of tea anymore.  I'm not sure why and I don't say that from the usual fanboy pit of despair ("HOW DARE THEY NOT MAKE A WOLVERINE STORY I LOVE! THEY HATE AMERICA!!)  It is what it is.  There's way too much cool stuff out there for me to worry about not liking super hero comics I liked more 25 years ago.  There's always Essential editions to relive the classic stuff.

Again, in no particular order ...

Archie's done a pretty great job of reimagining their line for the modern world.  ARCHIE 1941  puts Archie on the cusp of enlisting into WW 2.  Mark Waid's a master comics writer and the story so far is clipping along at a perfect pace.  The real star, though, is Peter Krause's art that harkens back to classic art of that era, creating a world that's perfect for the sincerity of the period.  Great stuff. 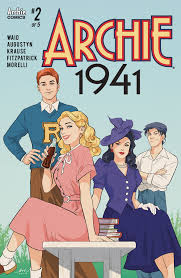 The Archie reinvention really seemed to begin with the AFTERLIFE WITH ARCHIE zombie book from a few years back and as that book's struggled to come out, they fleshed out the line (heh) with a small group of other horror books, the best of which is VAMPIRONICA which sees Veronica turned into a vampire.  Fun stuff that's serious horror without forgetting that it's based on long-standing characters.  The art by Greg Smallwood is terrific too (to the point that I think he's been snapped up by Marvel.) 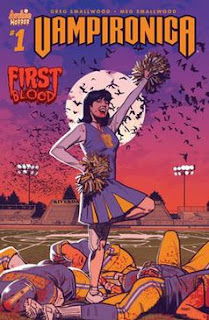 (Unfortunately, the shipping bug hit "Vampironica" too and it took an awful long time to put out 5 issues and has now gone on hiatus.  Still, track down the trade.) 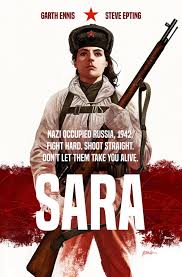 Speaking of World War 2 - Garth Ennis has long been one of the top war comics writers out there.  I don't love war comics, to be honest, but when a new publisher partnered Ennis with Steve Epting, I had to give it a look.  I'm glad I did.  SARA is the story of a team of Russian snipers in the second world war, taking out Nazis.  It's based on a real story.  This is a deeply affecting story with a heavy and complicated protagonist, defending a Russia that was hardly the heroes of history.

Steve Epting can draw anything.  This book only continues to prove that truth.

(SARA is from a new publisher called TKO Studios, who are trying to change the way comics are produced and distributed.  You can read the first issue for free online - and then you can either buy the entire series as singles at one time, or buy the trade.  Everything is available at once, so whether you want to binge or buy it in pieces is up to you.  I hope this new model works, for the sake of comics! 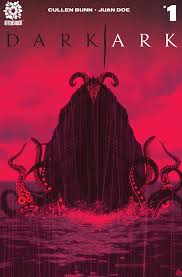 Cullen Bunn took one of those million dollar ideas that was right under all our noses and ran with it.  What if alongside Noah's ark there was another ark full of MONSTERS?  What an idea!  The book's as good as the idea as the monsters and a few trapped humans try to navigate the end times and come out on the other side.  Juan Doe's art brings each of the critters to life in style too.  It's a real end of the world epic. 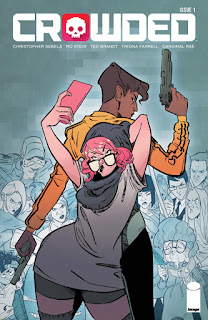 Christopher Sebela and artist Ro Stein have also taken a sort of solid gold modern idea and turned into comics magic.  In "Crowded" you can crowdfund an assassination and, in this story, a seemingly random irritatingly perky dingbat of a young woman, is targeted with a million dollar plus bounty - but we're not sure why, and she's not exactly coming clean.  She's protected by an angry bounty hunter who's basic claim is being the cheapest protection money can buy.

If I were going to list a book as my favorite from this year, CROWDED would be it.  The book is fast- the dialogue is blazing banter, the art has a sort of curvy jazz to it, it feels like a mix of classic animation with a splash of Al Hirschfeld.  The two protagonists are a perfect odd couple, one random and motor-mouthed, the other cold and serious.  It puts a lot of fun conflict underneath the bigger conflict - namely trying to stay alive as all sorts of misfits try and collect the ever-increasing bounty on our main girl.

Comics are always trying to be cutting edge and modern.  CROWDED pulls it off.  It's sassy and bright, with a story that's constant motion and action.  It takes the modern world and amplifies it a thousand times. 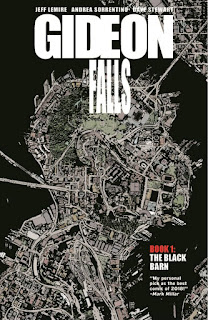 Sort of the opposite of CROWDED is GIDEON FALLS by Jeff Lemiere and Andrea Sorrentino, which is more of a David Lynch sort of horror story - abstract, sad, it takes a handful of damaged people and drills down into their pain, all with the looming specter of a myserious Black Barn that somehow is going to tie everyone and everything together, but probably not in a good way.

More than most other books, GIDEON FALLS feels like episodic television, but uses the advantages of the comics medium to carve out its own path.

These are two books that were one-shots, not series, but were worth their weight in comics gold. 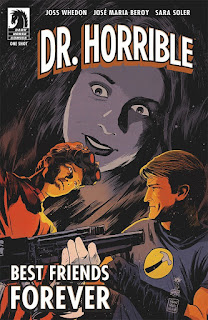 Dr. Horrible came back in 2018 in a one-shot comic written by Joss Whedon himself!  Jose Maria Beroy's art brought all the characters back and in fine form.  A new character called Hourglass made her first appearance as did Moist's henchwomen, The Towelettes.  At the center, of course, was Dr. Horrible and Captain Hammer being unusually friendly.  It was a fun one-shot that felt like the original movie, all it needed was songs.

The world NEEDS DR. HORRIBLE.  Now more than ever. 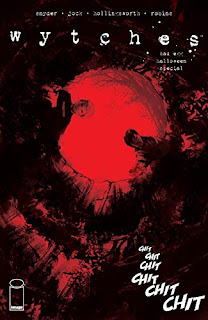 Whatever year the original WYTCHES mini-series came out, it was the best comic from that year.  WYTCHES is a tremendous horror comic and the only frustration has been waiting for more (Scott Snyder and Jock have been doing Batman instead, but that's a rant for another day.)  Finally we got a taste this year with the BAD EGG Halloween Special that had all the depth, drama and horror of the original series.

Snyder has promised the next big WYTCHES story in 2019.  In the meantime, BAD EGG showed us that he and Jock can take control of this world whenever they want, which is pretty damn exciting for comics fans.

MY FRIENDS ARE MORE TALENTED THAN YOUR FRIENDS

THE BEAUTY and THE REALM 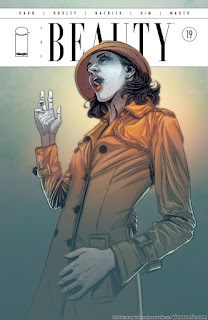 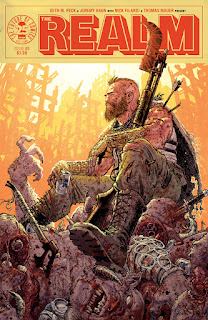 My friend Jeremy Haun has been putting out two great books for a year or two now.  One is THE BEAUTY, science fiction police drama set in a world where beauty is passed around as an STD. The other is THE REALM, an apocalyptic adventure set in a world where the creatures of Dungeons & Dragons invaded our reality and made a big mess of everything.  Both books deliver their action in very different ways from one another.  Jeremy's collaborates with Jason Hurley writing THE BEAUTY (with art by Thomas Nachlik) and Seth Peck co-writing THE REALM.

THEY'RE NEW TO ME

These are books that have been out longer than 2018, but I just discovered them. 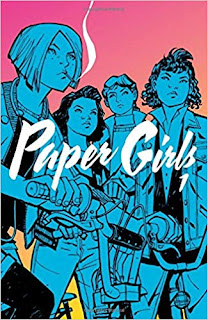 I mean, it's probably not surprising that Brian K. Vaughn and Cliff Chiang created a top notch comic but, still, PAPER GIRLS is as good as it gets.  It's a crazy time-travelling science fiction story set in the '80s that keeps piling mystery on top of mystery as the characters get closer to the truth, but further away from where they started.

It's a book I liked so much I made Andy read it :)

The only sad part about PAPER GIRLS is that apparently the next arc is the final one.  It's one of those books that even though it clearly set out to have an ending, I hoped it would take as long as possible to get there.

Also, Cliff Chiang is one of the best artists in the business. 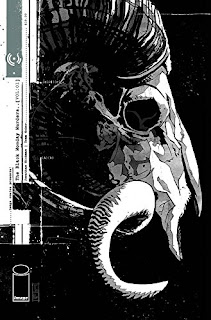 Dude, this book is in its own world.  Jeff Lemiere and Tomm Coker have created a story that makes all of the world market crashes into an insidious plot by nefarious forces.  What seems like a simple murder mystery, turns into a lot more and goes deeper and deeper.

What makes the book SO special though, is the style.  I read it in trades but the individual issues are 40-50 pages long and are a mix of traditional storytelling, newspaper articles and abstract images.  It's a book that rewards re-reading and lingering on the pages for as long as possible to see what's in the background.

Hopefully 2019 will deliver more great comics for me to read.  2018 certainly did its job.

Try new things, folks.  There are too many good comics to just read the same old crap you read 30 years ago that you've stopped enjoying.

Fundraiser! Donate to the Benefit for the Cran!